Playoff basketball has returned to New Orleans. From a 1-12 start to two games in the NBA’s Play-In Tournament. Somehow the New Orleans Pelicans have defied the odds — and oddsmakers — to battle the top-seeded Phoenix Suns in the first round of the NBA Playoffs.

Games 3 and 4 of the first-round series will be at the Smoothie King Center on Friday and Sunday night. The Suns remain overwhelming favorites to win the series at Louisiana sports betting apps.

It’s been a Pelicans season with no Zion Williamson, a big trade at the deadline and the emergence of a stellar rookie class. The Pelicans don’t look like the team that started 1-12 anymore.

Here are the five regular-season games that catapulted them to the playoffs.

There wasn’t one miraculous shot. There were two if you stop and think about it.

Thunder guard Shai Gilgeous-Alexander was moving to his right about 35 feet away from the basket when he launched a three-pointer that hit nothing but net with 1.4 seconds left to tie the score. Everyone figured we were heading to overtime.

The Pelicans inbounded the ball to Devonte Graham who took two dribbles and launched what ESPN called a 61-footer. The ball must have gone 40 feet in the air.

It went swish. Pelicans win. It was the shot of the year.

At the time, the Pelicans were 8-21 and the Thunder were 8-18. In the grand scheme of things, it wasn’t super important but it did give the Pelicans and their fan base a reason to believe something special could happen. 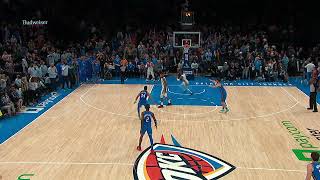 The Pelicans were six-point underdogs on the road against Denver, but Pelican fans remember this as the Herb Jones Game.

The rookie from Alabama has already inspired a catchphrase “Not On Herb” for his defensive prowess and immediately filled a key role in the Pelicans rotation.

Against the Nuggets, Jones, a second-round pick. went off. He scored 18 of his 25 points in the fourth quarter showing explosive ability. He never scored more than 21 at Alabama, and the 25 was one off his season-high.

Second-round NBA picks aren’t supposed to be stars in the NBA, but Jones looks like one.

Anthony Davis was a Pelican for seven years, but his detached demeanor and aloof play never endeared him to New Orleans. There were flashes of greatness, but frequent injuries too.

When New Orleans traded him to the Lakers he never did make a social media farewell statement to the city. A southern hospitality no-no.

The Lakers were favored by two points in this game and it was supposed to be their last stand. Davis was coming back from an injury and the game was in LA. The Lakers were fighting for a spot in the Play-In Tournament. They still, you know, have LeBron James.

There was a major diss as the Pelicans had to practice at Crypto.com arena with the lights turned off.

Davis had 23 points, but the Pelicans were just better. CJ McCollum had 32 points. Brandon Ingram (the big player the Pelicans got back from the Lakers in the Davis trade) had 29.

New Orleans finished strong and the Lakers looked, well, old and tired. James missed a three at the buzzer and the Lakers were toast. The Pelicans were rising.

The Pelicans shook up their roster with a trade for Blazers guard CJ McCollum. The hope was he could provide points and leadership to a young roster.

Then in the first five games with McCollum, the Pelicans went 1-4. No one was thinking playoffs. It looked dismal. New Orleans rode into Phoenix a seven-point underdog against the best team in the NBA.

It was a clinic. By the Pelicans.

Everything came together. McCollum had 32 points. Ingram scored 28 and for the first time, New Orleans fans saw what could be with the two stars together.

Jonas Valanciunas had 18 points and 17 rebounds. The Pelicans ended the Suns’ eight-game win streak. They led the entire second half and outrebounded the Suns 37-30.

It was another sign that this team had a chance to be special.

Let’s get one thing out of the way. The Pelicans will never be the Lakers. It doesn’t have the celebrities, the championships, or the mystique.

But the two franchises are linked thanks to the big Anthony Davis trade in 2019. The Lakers reaped the rewards and won an NBA title, but now the bill is due and New Orleans is getting the draft picks from the Lakers.

With that backdrop, the Pelicans were three-point favorites at home with both teams trying to reach the NBA Play-In Tournament. It looked like a laugher. The Lakers led 12-0. They led by 23 points in the second quarter, and by 20 at halftime.

James had 38 points. He is the best player in the world. But he wasn’t on the better team.

Brandon Ingram was unstoppable coming back from a hamstring injury to score 26 points. Trey Murphy III, another Pelicans super rookie, had 21 points.

Point blank, the Lakers choked. The Pelicans roared back to win putting them in a prime position to reach the playoffs.

View all posts by Melina Alvez