Grab the remote and you’ll find CJ McCollum calling the shots as a multi-platform NBA analyst on ESPN. The New Orleans Pelicans star guard recently inked a deal with the leading sports network and made his debut on June 2.

A journalism major during his college days, McCollum welcomed the “opportunity to put my journalism background to use on the largest stage with the many professionals at ESPN.” He called it “a dream come true. I get to join a lot of the shows I watched as a kid.”

NBA fans in the Pelican State will have added fan engagement with McCollum’s new deal. As a star player fans can tune in to his appearances and follow his podcasts. And increased fan engagement works hand in hand to prop up sports betting in Louisiana and across the country.

McCollum is now 30 years old and President of the NBA Players Association as of last summer. This ESPN venture makes him the second active NBA player in a deal with a major network; Golden State Warriors forward Draymond Green joined TNT Sports as an NBA analyst in January.

David Roberts, ESPN’s head of NBA and studio production, called McCollum “one of the most respected players in the NBA.” He went on to say:

“Furthermore, he’s an extremely talented member and leader on one of the most interesting teams in the league… CJ’s commitment to this opportunity combined with his passion for journalism and sports broadcasting will be a clear benefit for NBA fans.”

The sports network expects McCollum to appear as a game analyst for:

“A gift and a curse”

In a conference call with ESPN Press Room, McCollum said, “As a player, you’re always trying to get better.” He spoke of playing pro as an athlete as both “a gift and a curse.”

It’s an athlete’s dream job, he said, but downsides include some kinds of scrutiny other people don’t find themselves subject to. “There’s a lot of things that get out of hand because of social media, so you have to balance that.”

And he spoke of the benefits of being a sports journalist with actual playing experience. In his case nine years of experience so far. This affords him a “unique perspective,” such as being able to view a game in terms of “how it’s going to continue to transpire.”

He believes that players should have their own voice, and understands “the importance of being able to share someone’s message the right way.”

Sports Business Journal recently heralded him as the “best news for reporters looking to regain access to NBA locker rooms,” which became off-limits due to the pandemic and remain so. McCollum thinks locker room access is important and hopes to find “a happy medium” for both players and reporters in terms of face-to-face interviewing.

Despite measuring only 5’2” as a freshman, Christian James McCollum played varsity basketball at GlenOak High School in Canton, Ohio that year. By his senior year, after several growth spurts and standing about 9 inches taller, McCollum was the leading scorer in his team’s history.

Attending Lehigh University in Bethlehem, Pennsylvania, he was the leading freshman scorer in the nation, and the first in the Patriot League to get named Player of the Year and Rookie of the Year. He led Lehigh’s Mountain Hawks team to the 2010 NCAA Tournament.

He kept up his academic game right along with his hoops game. While at the university, he got his journalism chops covering many of the school’s sports.

After graduation, he signed with the Portland Trail Blazers and was co-named Rookie of the Year in an NBA survey. Fast forward to February of this year’s midseason, when Portland traded McCollum and several other players to the Pelicans. He averaged 24.3 points in this season’s 26 games.

McCollum’s all about podcasts, wine, and family

Now at 6’3” and turning 31 in September, he’s a husband and dad. (You can sometimes see him gently rocking his infant son on his popular “Pull Up with CJ McCollum” podcast.)

And, in addition to his basketball career and his ESPN venture, McCollum has started up his own wine business. (What is it with celebs and athletes and wine businesses? Does an orchard come with your SAG card or jersey?). His wine label carries the name “McCollum Heritage 91” for the street he grew up on and the year he was born.

He also has his own popular podcast, as mentioned, and he’ll collaborate with ESPN to develop a new one. The new podcast should be available on all streaming platforms.

As McCollum himself said, “I’m still young in my work life on the court and off the court.” As for what’s ahead immediately, he told ESPN Press Room, “Summertime is more so spending time with my family, working on my game.”

And as far as his analyst’s eye goes, he predicts “the Celtics are going to win it all.” Keep in mind his prediction that the Pelicans would make it to the playoffs proved correct. And he made that prediction just a day after he was traded to the team. 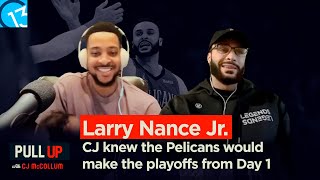